Slovakia is central Europe’s best kept secret: just a stone’s throw from Vienna, Prague and Budapest is a land of dramatic mountains, hilltop castles, historic wooden architecture, preserved medieval towns, and delicious food and locally grown wines. Even better, it’s easy to get to and to get around, it uses the euro, English is widely spoken and it’s competitively priced. Here are ten reasons to get to know Slovakia… 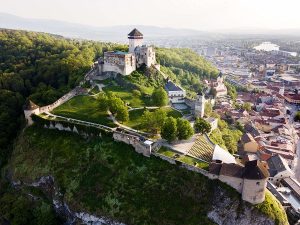 1. Castles on every hilltop…

There’s a medieval castle in every valley. Start with Bratislava castle, standing guard over the capital and the Danube River. At Bojnice and Red Rock you’ll find charming chateaux, and in Spiš explore the striking ruins of the largest castle in central Europe.

2. …with some fascinating history

At other castles, you can meet some of Slovakia’s more notorious past residents: Čachtice castle was the home of the murderous blood countess, Elizabeth Báthory; at Trenčín castle the Roman legions left their mark; and Orava castle, backdrop for the original Nosferatu film, was where Dracula first came to life on screen.

Take the waters: Slovakia’s natural mineral springs are the source of dozens of health spas from stately Piešťany to ultra-modern wellness resorts. If water slides are more your thing, check out the thermal waterparks in Poprad and Bešeňová.

4. The wooden wonders of Slovakia’s countryside

UNESCO has recognized the unique wooden churches of Slovakia as a world cultural treasure. Explore the stunning scenery of central and eastern Slovakia as you visit these historical gems.

5. A mountain village, captured in time

In Čičmany you can walk through the world’s first folk village reserve, a charming hill-top community that preserves and showcases Slovakia’s rural sheep-farming traditions.

And in Levoča, wonder at the world’s largest wooden altar, hand-carved in the sixteenth century by Master Paul, Slovakia’s very own superstar craftsman. In the preserved medieval town square, find the old market hall – and the cage of shame!

Slovakia is a land of mountains, dramatic but still accessible. Take in the stunning views of the High Tatras, and the caves and walking paths among the Low Tatras. Or, deep in the Slovak Ore Mountains, visit the former gold mining town of Banská Štiavnica, so rich it has two castles.

In the beautifully restored medieval Old town of Bratislava, Slovakia’s capital, you can wander traffic-free streets, experience central European café culture and retrace the coronation route taken by Hungarian kings and queens for quarter of a millennium.

9. Enjoy the flavors of Slovakia

While you’re there, taste Slovakia’s traditional cuisine – a blend of German, Czech and Hungarian influences. And savor its wines, of six traditional regions, from Tokaj in the east to the Small Carpathians in the west, near Bratislava. Why not include a wine-tasting tour of the local vineyards?

Finally, it’s easy! Slovakia is the geographic midpoint of Europe, so it really is at the center of the continent. There are direct air links to Europe’s major cities to Bratislava, or nearby Vienna airport (less than 45 minutes’ drive from Bratislava), direct motorway links to Vienna, Prague and Budapest, and fast rail links to the neighboring countries. Slovakia has been an EU member since 2004, joined the Schengen area in 2007, and adopted the euro in 2009.

It’s easy to Enjoy Slovakia – let us show you how.