In the Best Tradition: The Slovak Foods You Have to Try

A highlight of any visit to Slovakia is the country’s food. Slovakia’s traditional cuisine is a blend of German, Czech and Hungarian influences, and is based on simple, high-quality local ingredients, cooked well. Typical components of a Slovak meal include pork, wheat, poultry, cabbage, potatoes, sheep and cow’s cheese, garlic, onions and paprika. 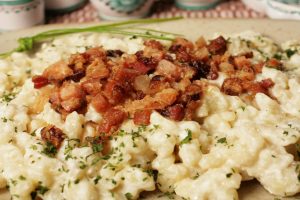 While you’re here, try as many of these delicacies as you can…

Bryndzové halušky is the national dish, a filling meal designed to sustain a shepherd (or shepherdess!) during a long day in the hills. Halušky are small homemade potato dumplings similar to Italian gnocchi, covered in bryndza, a tangy Slovak sheep’s cheese. The dish is typically topped off with a sprinkling of fried bacon pieces and chives. It’s the perfect dish on a trip to the mountains.

Soup is the tasty introduction to any Slovak meal. You’ll come across a range of favourites, from bean soup to chicken consommé, but the winter favourite is kapustnica, based on sauerkraut cooked with mushroom, potatoes and chunks of spicy sausage. 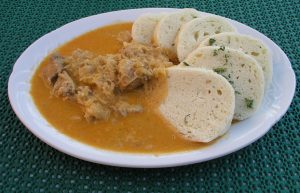 As evidence of the regional influences on Slovak cuisine, one of the most common dishes is named after a Hungarian city: segedínsky guláš, or Szeged goulash. It’s another sauerkraut-based dish, this time cooked in a mouth-watering sauce with sweet pepper and chunks of pork, and served on steamed dumplings. Despite the name, it is not part of the traditional cuisine of Szeged and, unlike many Hungarian dishes, it’s not spicy.

Langoš – freshly fried flatbread, often flavoured with garlic and topped with ketchup – is a savoury Slovak treat commonly served at outdoor venues, such as parks and at festivals. Look for the long queues!

Another savoury snack, which resembles a salty scone and is commonly eaten as an hors d’oeuvre or with beer, is the pagáč. These are baked from leavened dough and seasoned with salt and pork fat.

For those with a sweet tooth, the trdelník is a delicious Slovak pastry traditionally cooked on a wooden baton – a ‘trdlo’ – above an open fire, and served fresh, dusted with nuts and icing sugar. Originally from the western Slovak town of Skalica, this is often served as an accompaniment to the regional wine.

Closer to the capital you’ll find another baked treat: Bratislavské rožky, or Bratislava rolls. These are a sweet pastry crescents filled with nuts or poppyseed. Try them while you take part in our Bratislava Treasure Hunt or Royal Bratislava Walk.